The fan-inspiring, steamy stream of ABC Daytime: Back on Broadway, a nostalgic evening of song and conversation with the stars of All My Children, One Life to Live and General Hospital, raised a stellar $130,565 to benefit Broadway Cares/Equity Fights AIDS, the philanthropic heart of Broadway.

When this month’s streamed event donations are added to the seven-year run of the annual concerts, ABC Daytime stars have raised an astounding $2,020,565 for Broadway Cares.

The streaming total includes a matching donation of $50,000 made by generous Broadway Cares supporters The Dream Alliance.

This year’s online reunion event took audiences back in time to see their favorite ABC Daytime divas and devilish scoundrels strutting their stuff on the Broadway stage. Daytime favorite Cameron Mathison hosted the in-person events and returned for the virtual stream to lead viewers through 28 dynamic performances from the archives and the new reunion conversations among the ABC greats.

Whoopi Goldberg kicked off the night with a heartfelt welcome and quick history lesson on the concerts’ origins. The first gathering, at New York City’s Town Hall in 2005, celebrated All My Children’s 35th anniversary. The concert then blossomed into an annual event that added stars from One Life to Live and General Hospital, as well as Goldberg and her friends at The View.

The trip down memory lane kicked off with a rousing rendition of “9 to 5,” setting the tone for the night as the ensemble of daytime favorites – including Kristen Alderson, Brandon Barash, Kassie DePaiva, Bobbie Eakes, David A. Gregory, Natalie Hall, Mark Lawson, Jason Tam and Brittany Underwood – were introduced through adapted lyrics that reference their day(time) jobs.

All My Children legend Susan Lucci made herself the victorious, Emmy Award-winning punchline in “Winning Isn’t Everything,” a song written for her by the great Marvin Hamlisch, and later turned up the temperature with her sultry version of “Fever.”

The charming Vincent Irizarry, who crossed over as Dr. David Hayward on All My Children and One Life to Live, had fans swooning with his version of “She Wasn’t You” from On a Clear Day You Can See Forever.

Kristen Alderson grew up on One Life to Live, debuting as Starr Manning at the age of 6 and remaining a Llanview resident for 15 years. She brought her teenage dream back to life in “Broadway Baby” from Follies.

There was no shortage of daytime diva dancing on the virtual stream. Broadway favorite Jason Tam lit up the stage singing “Too Darn Hot”; the royal foursome of BethAnn Fuenmayor, Susan Lucci, Hillary B. Smith and Chrishell Stause brought the days of disco back in “Daytime Queen”; and Smith’s heart-pumping “It Ain’t the Meat, It’s the Motion” had the stage swirling alongside an ensemble of dancing dynamos.

General Hospital cast mates Steve Burton and Laura Wright introduced fellow GH‘er Finola Hughes, who floated onto the set of the Port Charles emergency reception area in an original dance to “You Make Me Feel So Young.” Hughes was paired with the debonair Atilio Jamerson in the piece choreographed by Tania L Pearson-Loeser and created especially for this stream.

Pine Valley’s own Jackson Montgomery was “Happy Not to Be in Love,” an original piece written by Montgomery’s real-life persona Walt Willey and performed with guitar in hand.

The true divas of stage and screen met as Renée Elise Goldsberry and Lucci battled for the spotlight in a glittery rendition of” Dreamgirls,” led by Jeffrey Carlson, Kassie DePaiva and Bobbie Eakes.

Former One Life to Live flames Brittany Underwood and David A. Gregory left their hearts on the stage in a pair of classic love songs, “If Ever I Would Leave You” from Camelot and “Hopelessly Devoted to You” from Grease, complete with Underwood singing to a poster-sized likeness of Gregory’s dreamy face.

Broadway bombshells brought vocal excellence to the stage, with Tonya Pinkins‘ “Addicted to Love” and Renée Elise Goldsberry’s “Someone Like You” from Jekyll & Hyde.

The touring trio known as the “Divas of Daytime TV,” Kathy Brier, Kassie DePaiva and Bobbie Eakes, reunited in a new interview where they shared cherished memories of the past and introduced DePaiva’s buttery rendition of Burt Bacharach’s “I’ll Never Fall in Love Again” from Promises, Promises. Brier sang a lament of the showgirl days that passed her by in “I Wanna Be a Rockette” and Eakes showed her vocal prowess singing “And the World Goes ‘Round.”

Anthony Geary sported a house dress and a wig as the Edna to Stephen DeRosa’s Wilbur in “Timeless to Me” from Hairspray. 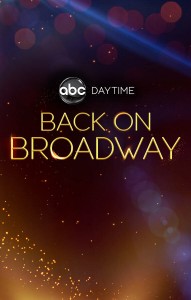 All My Children star-turned-morning show host Kelly Ripa even stopped by with a special video message, filmed on the set of Live with Kelly and Ryan. Ripa shared her love and admiration for her former cast members and underscored the importance of a donation to Broadway Cares.

Throughout the night, the stars emphasized the enormity of the current situation and informed viewers about ways their donations would help those struggling with the pandemic.

John Dietrich, who directed each of the ABC Daytime Salutes Broadway Cares concerts, wrote and directed the stream.  It was presented in partnership with ABC Owned Television Stations’ websites around the country with support from Good Morning America and The View.