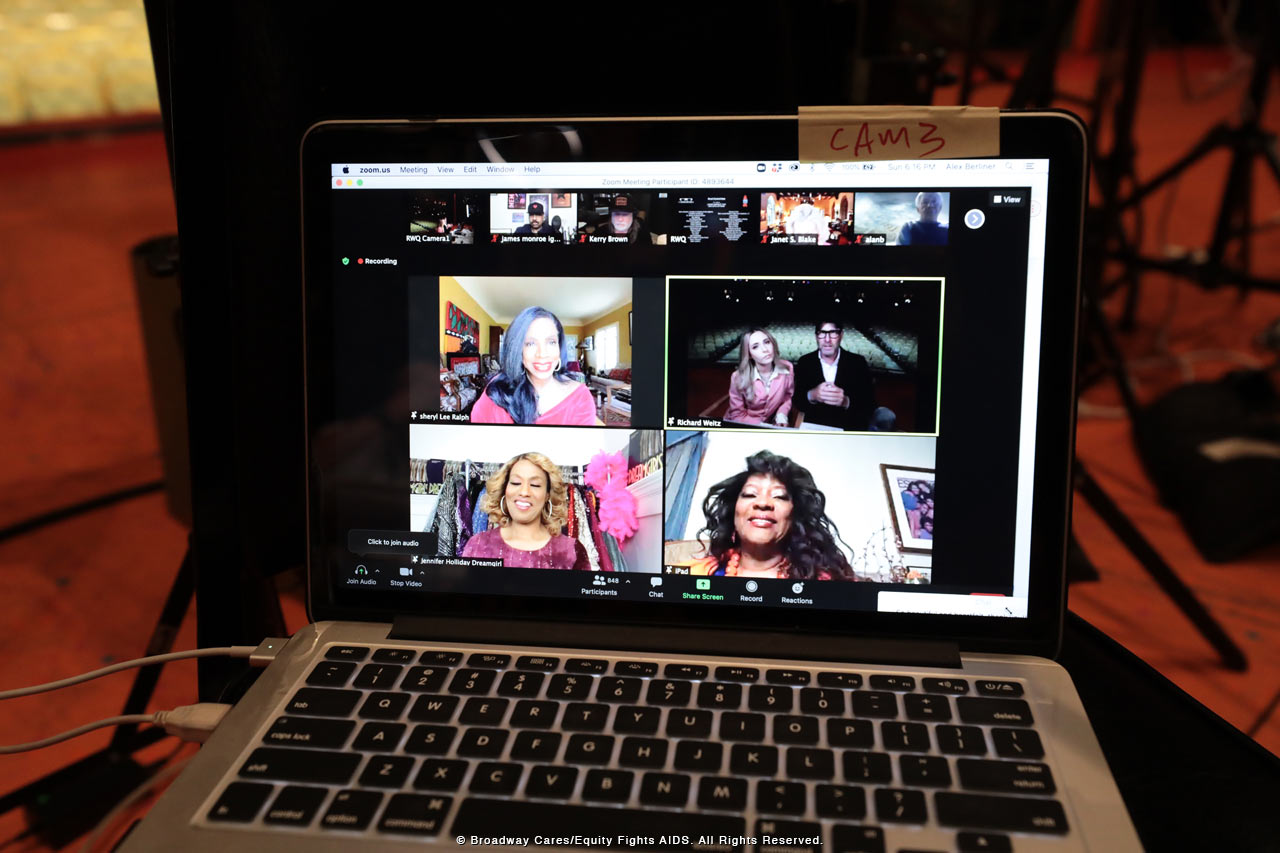 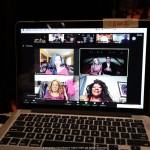 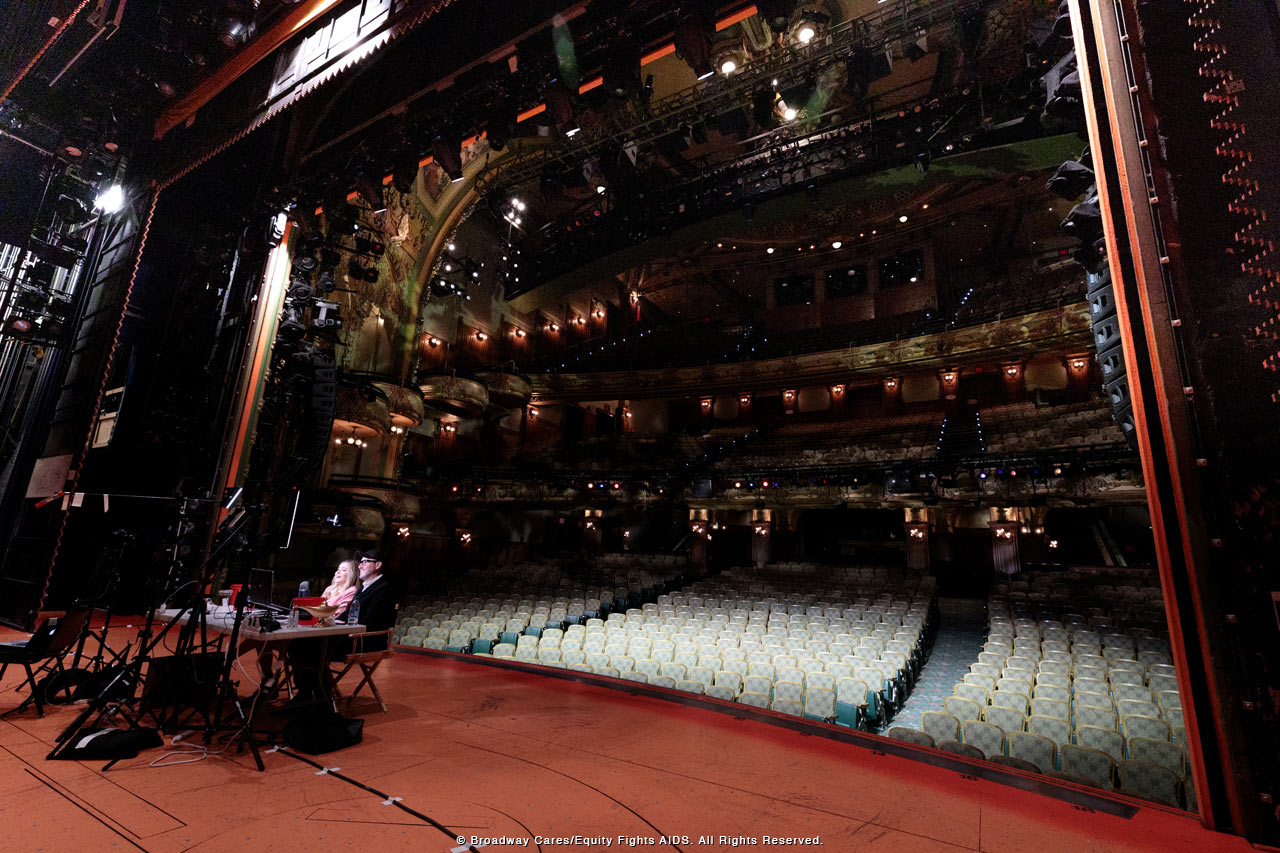 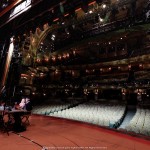 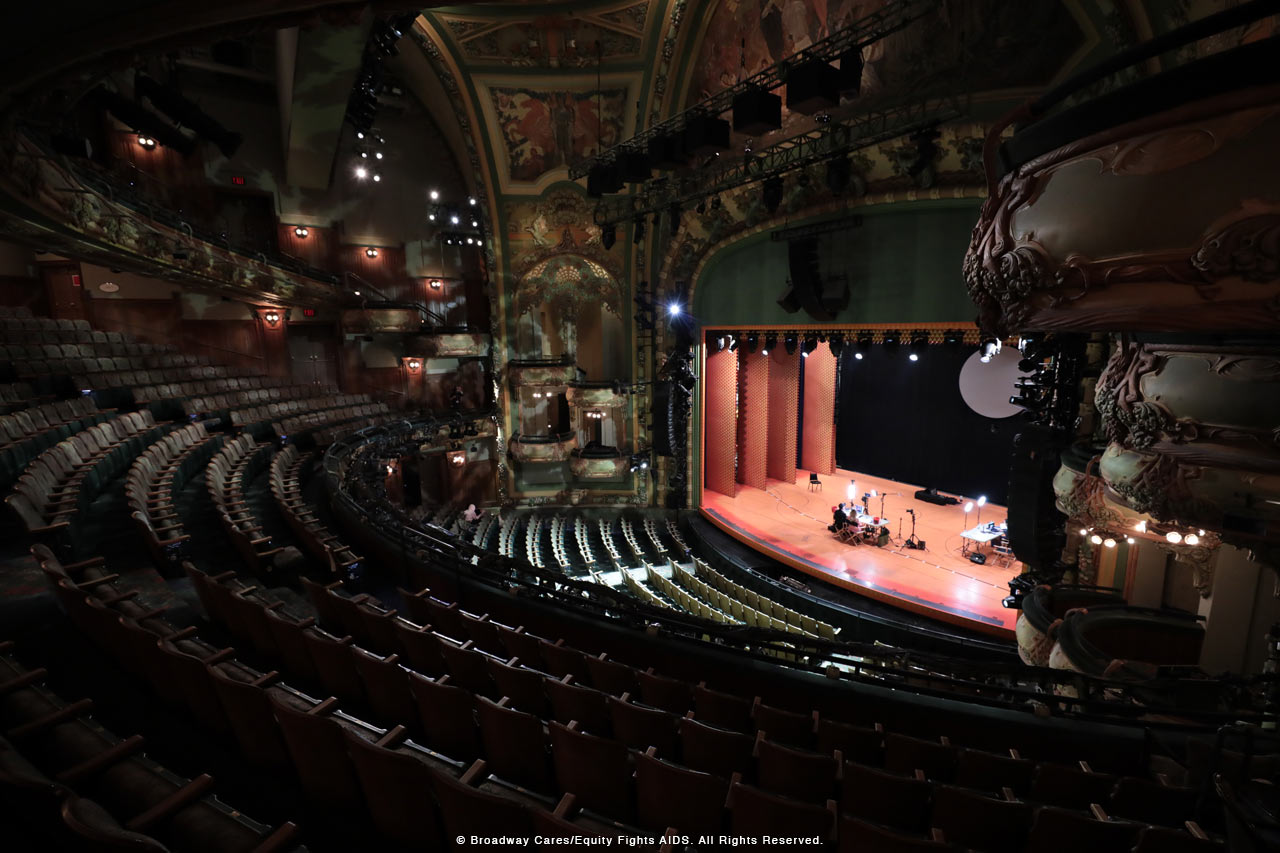 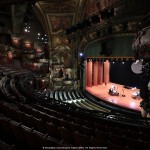 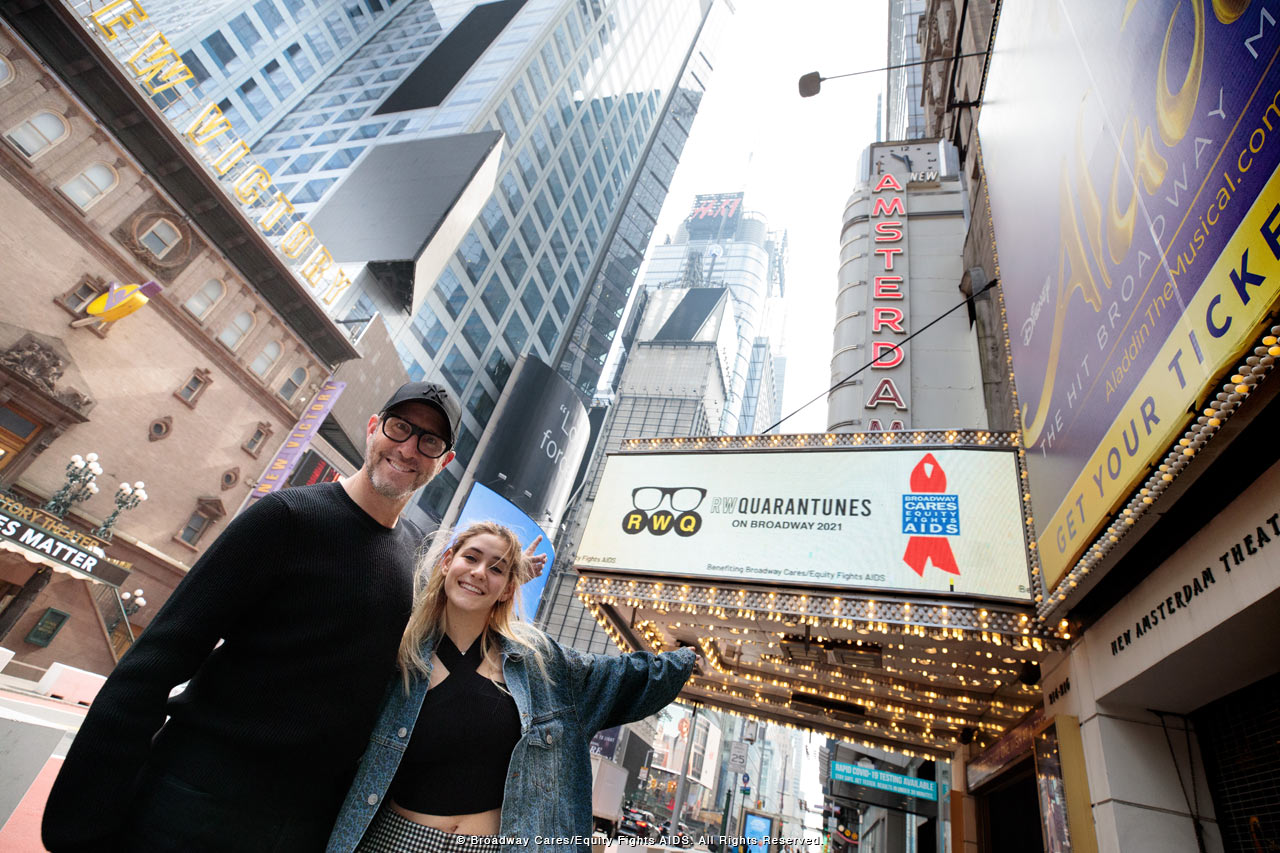 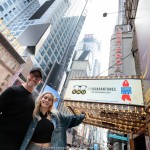 Three dozen of the best from Broadway and the entertainment industry saluted the one-year anniversary of RWQuarantunes, a pandemic-inspired series of invite-only online concerts, by coming together April 11, 2021, for a five-hour celebration of Broadway and Broadway Cares/Equity Fights AIDS.

To celebrate RWQuarantunes‘ one-year anniversary – and it’s 44th edition, the Weitzes selected Broadway Cares/Equity Fights AIDS to be, for an unprecedented third time, the beneficiary of donations during the stream. The evening raised $1,309,970.

RWQuarantunes‘ creators and hosts Richard Weitz and Demi Weitz streamed live from the bare stage of Broadway’s New Amsterdam Theatre, home to Disney’s hit musical Aladdin. The father-daughter duo left their usual kitchen-turned-RWQuarantunes production studio in Los Angeles to host this special Broadway-themed edition from the historic theater, its empty orchestra seats serving as a stark reminder of Broadway’s current closure. Richard Weitz is a partner at the global entertainment agency WME; Demi is a high school senior whose 17th birthday in 2020 sparked the idea for the online concerts.

As usual, RWQuarantunes featured blockbuster entertainment from start to finish.

The original Dreamgirls – Loretta Devine, Jennifer Holliday and Sheryl Lee Ralph – reunited for a conversation about the musical’s upcoming 40th anniversary. They discussed the show’s extended path to Broadway and favorite cut songs from the musical, and gave thrilling impromptu performances of the show’s title song, “And I Am Telling You” and more.

Kristin Chenoweth surprised Richard with a duet of her and Demi singing “For Good” from Wicked in honor of his birthday the day before.  Chenoweth followed up the surprise with a heartfelt performance of “I Will Always Love You,” which she dedicated to the father-daughter duo.

Theater stars also sang many of the iconic songs they introduced to the Broadway stage. Stephanie Mills, the beloved original Dorothy from The Wiz, gave an emotional performance of the show’s finale “Home.” Heather Headley, Broadway’s original Nala and star of Aida, wowed the audience with her interpretation of “Can You Feel the Love Tonight” from The Lion King. Robert Cuccioli reprised his role from Jekyll & Hyde to sing the show’s anthem, “This is the Moment.”  James Monroe Iglehart delighted the virtual audience with his show-stopping rendition of Aladdin‘s “Friend Like Me.”

Christopher Jackson, a RWQuarantunes favorite, joined with Iglehart, Andrew “Jelly Donut” Bancroft, Chris “Shockwave” Sullivan and Anthony “Two Touch” Veneziale of Freestyle Love Supreme. The improvisational hip-hop comedy musical group, which premiered on Broadway in 2019, performed two numbers “for the first and last time” – one inspired by the word “donate” and a second about Richard and Demi Weitz themselves.

Bernadette Peters, the only star to perform in all three RWQuarantunes benefiting Broadway Cares, wowed the virtual crowd with two songs by Stephen Sondheim: “Send in the Clowns” and “I Believe in You.” Joshua Henry accompanied himself on guitar singing “Tomorrow” and “Dear Theodosia” flanked by the cribs of his three-week-old twins. Lea Salonga called in from the Phillipines to give a twist on a Miss Saigon favorite, “Why God, Why.” Lena Hall rounded out the live performances with rock-infused renditions of “Midnight Radio,” “Defying Gravity” and “Alone” by Heart.

Erich Bergen created a video medley of New York City-themed music, including “Manhattan,”  “New York State of Mind,” “Another Hundred People,” “Empire State of Mind” and more. The medley featured many of his Broadway friends and colleagues including Hall, Patina Miller, Javier Muñoz, Alex Newell, Jarrod Spector and Aaron Tveit. Lauren Patten and the Broadway cast of Jagged Little Pill also shared a virtual performance of the show’s finale “You Learn” with the special appearance by songwriter Alanis Morisette.

Many of the recording industry’s own also joined the line-up. Singer-songwriters Ian Axel and Chad King – known together as A Great Big World – performed their breakout hit “Say Something” and “This is the New Year.” Melissa Manchester sang her 1978 hit “Don’t Cry Out Loud” and “Come In from the Rain,”  and was joined in conversation by songwriter Carole Bayer Sager. Diane Warren introduced a video of Laura Pausini singing “lo Sì” from the film The Life Ahead, and then spoke to The Cher Show‘s Teal Wicks about the songs she wrote that were included in the musical.

Singer-songwriter James Bay launched the first RWQuarantunes in April 2020 with his hit song “Let It Go.” At this anniversary edition, Bay returned to perform the song again as a tribute to RWQuarantunes‘ successful year of fundraising.

The incomparable concert and conversation ended with a reprise airing of this year’s Broadway Backwards finale, “You Will Be Found,” featuring Jenn Colella and Jay Armstrong Johnson with 50 Broadway performers.

Broadway Cares Executive Director Tom Viola told the virtual crowd: “RWQuarantunes has enabled Broadway Cares to do much more than we ever imagined we could when the pandemic forced Broadway and the theater industry to shut down. Richard and Demi stepped forward as unexpected champions and allowed us to reach out to tens of thousands of people in the industry and millions more across the country. They will be a part of the Broadway Cares family forever.” 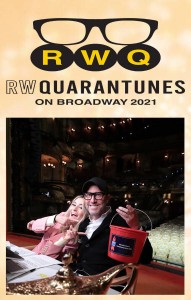 This unique edition of RWQuarantunes was hosted live from the New Amsterdam Theater. Special thanks to all at Disney Theatrical Group and especially President Thomas Schumacher for making the Weitzes, RWQuarantunes and Broadway Cares once again so welcome.

Longtime Broadway Cares supporter City National Bank matched $100,000 in donations during the stream, followed by a second $100,000 match by a quartet of Broadway producers – Elizabeth Armstrong, Rebecca Gold Milikowsky, Spencer Ross and Barbara Whitman. In addition, the Dream Alliance matched $150,000 of donations and, in the night’s final hour, Phill Gross and Elizabeth Cochary Gross matched $250,000 in donations made during the stream.

RWQuarantunes has become the hottest online house party and viewers never have to leave their couch. It’s a low-key and wildly fabulous insider party where anyone might drop by to perform from their living room, at-home recording studio or desk for the scores of VIPs also on the video call. In their year of virtual fundraising concerts, the Wietzes and RWQuarantunes have raised more than $23 million for 33 nonprofits nationwide, including Big Brothers/Big Sisters, the Equal Justice Initiative and United Way Los Angeles.