Tens of thousands of fans around the world “Zoomed In” to watch sensational striptease when the first-ever digital edition of Broadway Bares streamed August 1, 2020, and raised $596,504 for Broadway Cares/Equity Fights AIDS.

At the conclusion of the stream, Broadway Bares dancers and those behind-the-scenes launched their annual, competitive fundraising campaign, called Stripathon.

Broadway Bares‘ Tony Award-winning creator and executive producer Jerry Mitchell said he asked past performers and artists to give him three words to best describe Bares to total strangers “The one word that popped up the most was community,” Mitchell said during the stream. “I created Bares to bring the Broadway community together so we could understand our collective power to make a difference in the early days of the AIDS crisis. And today, we’re still using that power and our sexy dancing bodies to raise money for Broadway Cares, and our spirits, too.”

Broadway Cares Executive Director Tom Viola said: “Since first joining seven of his friends dancing on the bar at Splash in the now-iconic first incarnation of Broadway Bares, Jerry Mitchell has had a remarkably unique and extraordinarily generous vision of how Broadway Bares could be much more than hot and sexy fun. Jerry foresaw and made certain that Bares could also be a celebration of health, shared well-being and, indeed, life. Over the last 30 years, many hundreds of others across the community have joined him in a similar commitment. Broadway Bares: Zoom In will mark the brilliant legacy of Broadway Bares for years, well beyond its presentation as an online fundraiser in the midst of these very challenging and deeply troubled days.”

The celebrity guests dished never-before-shared stories and secrets from Broadway Bares. Krakowski, who appeared in Bares during her Tony Award-winning run in Nine, talked about her experience defying gravity as she twirled upside down in silks, describing it as the closest she’s ever come to a “rockstar moment.”

Light, a three-time Tony recipient and fixture at Broadway Bares, focused on the importance of staying safe and getting tested, reminding the audience that “safe sex is hot sex.” Shaiman, a Tony-winning composer, shared the heartwarming story of how he met his husband at Broadway Bares, who was volunteering for the show at the time. And Sieber wrapped up the evening as he has for nearly 20 years as the master of rotation, the finale where audience members are invited to tip dancers.

The August 1 stream was a virtual celebration of Broadway Bares after the annual spectacular’s 30th anniversary event, originally scheduled for June 21, was postponed due to the coronavirus pandemic. 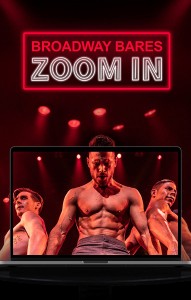 The first $200,000 donated to the stream was generously matched dollar-for-dollar by The Dream Alliance.

Broadway Bares was created in 1992 by Mitchell, then a Broadway dancer, as a way to raise awareness and money for those living with HIV/AIDS. In Broadway Bares‘ first year, Mitchell and six of his friends danced on a New York City bar and raised $8,000.

Last year, Broadway Bares took stars and fans alike on a romp around the world at Broadway Bares: Take Off. The tantalizing twist on travel raised a record-breaking $2,006,192. Broadway Bares has raised more than $21.8 million for Broadway Cares/Equity Fights AIDS.

Stripathon is the annual competitive fundraising campaign that historically ends the day of the June show. Shifting in response to world events and this year’s virtual edition of Broadway Bares on August 1, participants began fundraising immediately after the show and continued their enthusiastic efforts through September 7.

Fundraisers used their creativity and talents to raise money during Stripathon. Daniel Evans, also known as the Broadway Barber, donated a portion of his haircut and color proceeds to his Stripathon campaign. Sammy Landau embroidered rainbow roses benefiting their fundraiser. And costume designers Karl Ruchdeschel and Stacey Galloway created limited edition bedazzled face masks for every $50 donation to their Stripathon campaigns.

Recognizing that many of the fundraisers are out of work or facing tough financial times, up to $500 of their fundraising efforts was given back to the passionate Stripathonners. It was a small token of appreciation for the years of generosity these individuals have shared through their fundraising and talents.