The spooktacular, fantastical stream of I Put a Spell on You, an over-the-top and cinematic homage to Hocus Pocus, raised $239,241 for Broadway Cares/Equity Fights AIDS over the Halloween weekend.

A collection of highly produced music videos woven together through the story of the Sanderson Sisters breaking the internet, the stream remains available to watch on this page. It premiered October 29, 2020. An album of the 18 pop hits performed in the show is available at broadwayrecords.com/spell and everywhere music is available.

I Put a Spell on You was created by and stars Broadway’s Jay Armstrong Johnson. It was produced under strict COVID-19 production protocols by Johnson and Danny Marin’s Con Limón Productions.

The evening took viewers through a series of star-studded performances as The Sanderson Sisters, played by Johnson, Allison Robinson and Amanda Williams Ware, recruited their villainous friends in an attempt to track down children and break the internet.

The evening opened with Gavin Creel playing homage to Hocus Pocus‘ Skeleton Band with a soulful and smooth performance of “Witchcraft.” Then, led by Heath Saunders, we meet the Sanderson Sisters in a spoof of Hamilton‘s “The Schuyler Sisters,” launching the trio and their diabolical friends on their plot of mischief.

The nefarious cast of characters included RuPaul’s Drag Race favorites Bob The Drag Queen and Alexis Michelle as the Evil Queen and the Mirror on the Wall from Snow White; Nick Rashad Burroughs as Gaston with Marin as Lefou from Beauty and the Beast; J. Harrison Ghee as The Master from Hocus Pocus; American Idol star and YouTuber Todrick Hall as the title character in Maleficent; Robyn Hurder as a modern-day Lady Tremaine from Cinderella with Alanna Saunders and Claire Saunders as Cinderella’s stepsisters, Anastasia and Drizella; Ilda Mason and Skizzo Arnedillo Arteaga as Yzma and Kronk from The Emperor’s New Groove; Julia Mattison as Carol Baskin and Joe Exotic from Netflix’s The Tiger King with Drew Gehling as a captive and captivating tiger; Eva Noblezada as Cruella de Vil from 101 Dalmations; and Will Swenson who shaved his head on camera to transform into The Joker from the DC Comics universe.

The stream of I Put a Spell on You was free and donations help those across the country affected by HIV/AIDS, COVID-19 and other critical illnesses receive healthy meals, lifesaving medication, emergency financial assistance, housing, counseling and more. The donations also support and champion organizations focused on social justice and anti-racism. 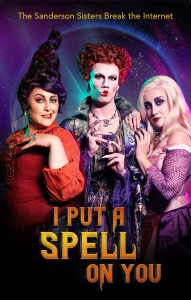