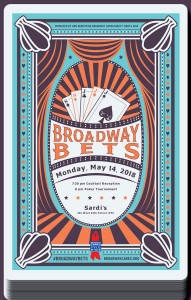 Place your bets on an unforgettable evening of cards and camaraderie at this year’s Broadway Bets, Broadway’s official poker tournament.

Broadway stars, industry insiders and theatre fans will raise the stakes at the Texas Hold ‘em tournament at the theatre district’s beloved Sardi’s Restaurant. Novices, aces and anyone willing to show their hand have the chance to win the coveted title of Broadway Bets champion. Prizes will be awarded to all players who reach the final table.

Cocktails for the fourth annual edition of Broadway Bets start at 7:30 pm; the tournament begins at 8 pm. All ticketing levels include hors d’oeuvres and an open bar.

Micah Hollingworth of Jujamcyn Theaters, Mark Shacket of Foresight Theatrical and Brett Sirota of The Road Company will return as tournament directors.

Texas Hold ’em-style tournaments begin with each player receiving an equal amount of chips. Two blinds are posted per hand to force the action. As play progresses, the amount of the blind bets increase. As players drop out, tables are combined until there is one final table of players competing for the championship title.

For those who haven’t quite mastered their poker face, guest passes offer a chance to observe the poker table action and play other casino games with an opportunity to win prizes. All prizes will be announced later this spring.