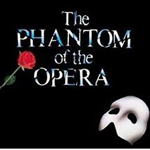 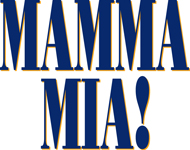 In May, Broadway’s all-time longest running show celebrated another milestone as the now legendary musical, The Phantom of the Opera, surpassed the $4 million mark in fundraising for Broadway Cares / Equity Fights AIDS. Phantomopened on Broadway on January 26, 1988, right at the same time that members of the Actors Equity Council were organizing efforts to respond the AIDS crisis which was devastating the Broadway community. The birth of Equity Fights AIDS – which in 1992 would merge with Broadway Cares – and Phantom’s acclaimed arrival at Broadway’s Majestic Theatre were virtually simultaneous, and since that time there hasn’t been a moment that the Phantom companies, in New York and on the road, haven’t championed Broadway Cares / Equity Fights AIDS, sharing our message with millions on the other side of the footlights. 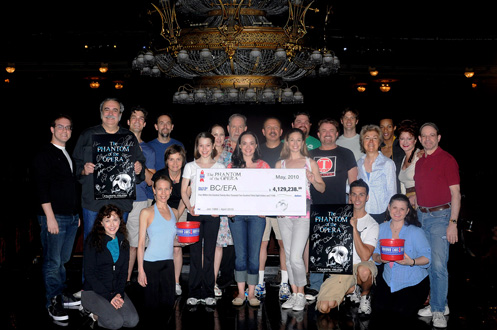 Meanwhile, December 2009 saw another younger long-running smash hit, Mamma Mia!, pass the $2 million mark during the GYPSY OF THE YEAR collection period. Since its opening at the Winter Garden Theatre on October 18, 2001 sending that and every subsequent audience into a cheering frenzy, this youthful and energetic cast and crew have stood by Broadway Cares as a steadfast ally, raising unprecedented amounts of money to help Broadway Cares help those who need it most. 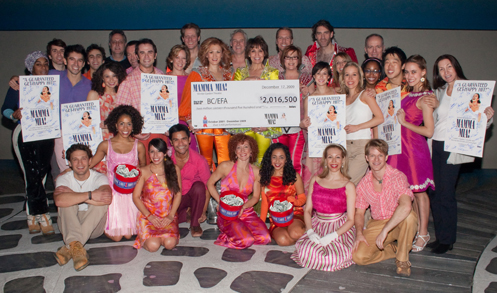 The Phantom Sings, Sells, Cooks
“Our philosophy has always been that at each performance we aim to raise one dollar for every seat,” says Craig Jacobs, long-time production stage manager and BC/EFA board member. “And I think it’s worked.”

During the 2010 EASTER BONNET Competition, Phantom raised $153,444, winning first runner-up for fundraising and doubling their $1 a seat goal during the six weeks of audience appeals. 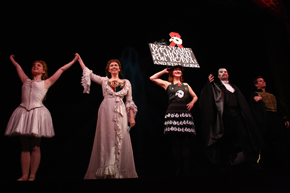 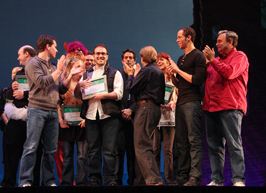 Company members from The Phantom of the Opera
take a bow after their 2010 EASTER BONNET presentation.

Company members of The Phantom of the Opera jump on stage at the 21st Annual GYPSY OF THE YEAR Competition to accept their award for Top Broadway Fundraiser with total of $161,060. Phantom has appeared in every GYPSY OF THE YEAR since its inception in 1989.

The sale of specially created merchandise items – like an exclusive CD featuring favorite songs sung by the many actors who have played the Phantom, the perennially popular signed Phantom poster and a series of cookbooks featuring delectable recipes created by members of the Phantom company – have given the show’s fundraising an extraordinary boost.

Kris Koop, a long-time BC/EFA volunteer who joined Phantom’s cast in 2000, didn’t originate the cookbook concept, but definitely kept the pot boiling. Through the years, two editions of The Phantom Cooks (Koop compiled Part Deux) – with recipes from two decades of cast and crew members – have raised more than $90,000 for BC/EFA.

“The second edition came shortly after 9/11 when so many charitable organizations were hurting. We decided to involve the neighborhood around the Majestic Theatre, including the Broadway Fire Company,” she says. For fall 2010, Kris is developing Part Trois, which will be sold separately and with the first two as a collectible set.

Merchandise sales have helped, but the biggest key to Phantom’s 22 years of extraordinary fundraising success is the commitment of its cast, crew, a troupe of loyal volunteers, and Cameron Mackintosh and The Really Useful Theatre Company, the show’s producers, says Jacobs.

“Every actor who has played the Phantom has made the audience appeal. We have some actors who volunteer to collect at every performance. It gives them the opportunity to talk to the audiences who love our show. So they’re building up good will with audiences while raising money for charity.” 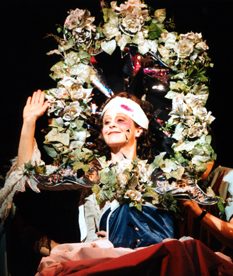 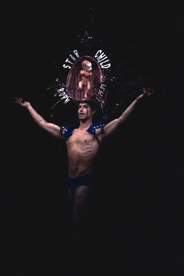 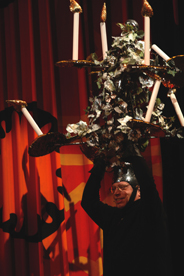 Photos Ops Help ABBA Musical Collect
Since the sing-along sensation Mamma Mia! opened in 2001, it’s been packing Broadway’s Winter Garden Theater and each spring and fall raising healthy amounts of cash for Broadway Cares’ funding of hundreds of AIDS and family services organizations around the country and seven vital programs of The Actors Fund. 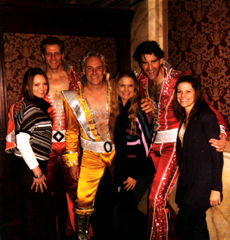 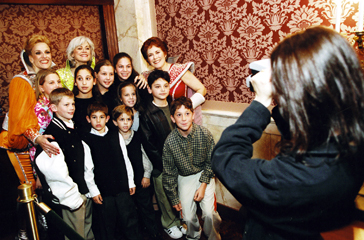 Mamma Mia! stage manager and BC/EFA Board member Sherry Cohen attributes her show’s success to cast and crew participation, which includes highly popular post-performance photo opportunities with cast members. On alternating nights, actors playing “the three dads” (pictured) any of whom might be the father of Mamma Mia!’s bride-to-be, or the three “Dynamos” – each dazzling in colorful spandex – pose for an average of 40-50 photos with audience members at $20 a pop.

This is why throughout 2009’s GYPSY OF THE YEAR collections, Mamma Mia was able to raise more than $65,000 and during 2010’s EASTER BONNET collections, the company topped that total with more than $67,000 for Broadway Cares. 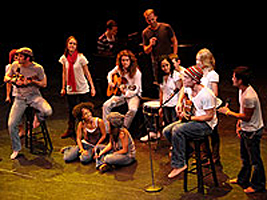 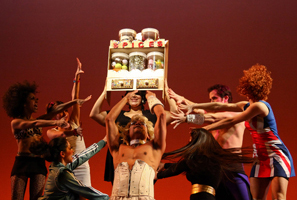 Mamma Mia! performs an uncharacteristically subdued
yet sublime version of Jason Mraz song, “Living High”
at the 2009 GYPSY OF THE YEAR Competition.

The company of Mamma Mia! offered “Spice Up Your Life!”
a musical featuring the Spice Girls and the possibility that
“Posh,” “Baby” or “Ginger” might be Sky’s mother
at the 2009 EASTER BONNET Competition.

“We’ve been doing the photo ops since we opened,” says Cohen, who adds that special Mamma Mia! aprons (a merchandise option subsequently copied by other Broadway shows) have been extremely popular.

Cohen singles out long-time Winter Garden crew member Glenn Russo as an example of the role everyone involved in her production plays in Mamma Mia!’s fundraising success. “He’s our house electrician and is as committed as anybody to this effort,” she says. “Since 2001, for eight shows a week during collection periods, Glenn has been setting up all our fundraising supplies for us.”

Living Legacy
Cohen emphasized that both she and Jacobs have not only been with their shows for many years (and continuity definitely helps with fundraising), but have worked on Broadway for three decades. 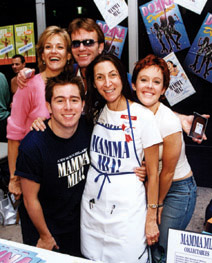 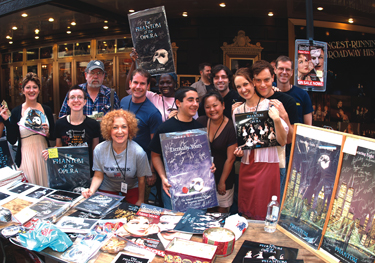 “Craig and I have been around since the early 80s, through the years when the AIDS epidemic was devastating Broadway,” says Sherry. “Over the years we’ve lost a lot of friends and colleagues. We’re survivors of that effort and we have not forgotten.”

In memory of those who are absent: Phantom of the Opera’s Barbara-Mae Phillips; Mamma Mia’s Daniel McDonald and beloved friends, co-workers and loved ones who made this good work possible and the very many for whom it was done. All are missed and remembered fondly.